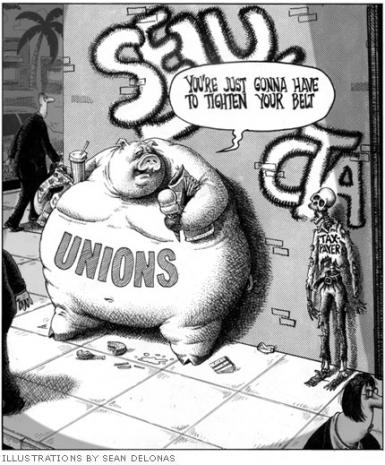 As school teachers and other publically employed members of unions in Wisconsin continue their march on that state’s capital, protesters frequently compare Republican Governor Scott Walker to Hitler or some other megalomaniac bent on destroying the hopes and dreams of the middle class. Some Wisconsin politicians, like state senator Fred Risser (D-Madison), paint the governor a despot by claiming that “[Walker] comes across more like a dictator and less like a leader.” And President Obama has asserted himself in the mix to assure union leaders he stands with them and believes the legislation Governor Walker supports will “just [make] it harder for public employees to collectively bargain generally,” and that it is “an assault on unions.”
Missing in all this name-calling and finger-pointing is the honest truth about what’s happening in states like Wisconsin where unions have run budgets into the ground: and that truth is that public employees have grown so accustomed to pensions, health insurance, and other benefits coming to them via taxpayer expense that they can’t handle the thought of paying their own way like regular “volk” (a little joke for the “Hitler” chanters in the crowd.)