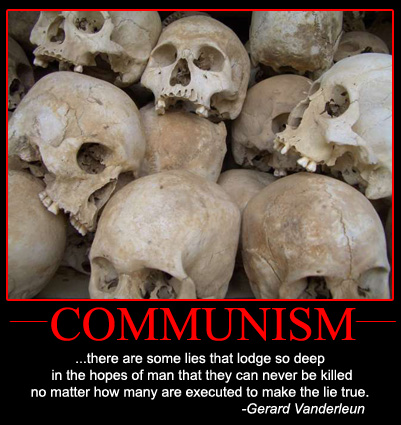 Karl Marx describes in his communist manifesto, the ten steps necessary to destroy a free enterprise system and replace it with a system of omnipotent government power, so as to effect a communist socialist state. Those ten steps are known as the Ten Planks of The Communist Manifesto… The following brief presents the original ten planks within the Communist Manifesto written by Karl Marx in 1848, along with the American adopted counterpart for each of the planks. From comparison it's clear MOST Americans have by myths, fraud and deception under the color of law by their own politicians in both the Republican and Democratic and parties, been transformed into Communists.

Another thing to remember, Karl Marx in creating the Communist Manifesto designed these planks AS A TEST to determine whether a society has become communist or not. If they are all in effect and in force, then the people ARE practicing communists.

Communism, by any other name is still communism, and is VERY VERY destructive to the individual and to the society!!

The 10 PLANKS stated in the Communist Manifesto and some of their American counterparts are...

1. Abolition of private property and the application of all rents of land to public purposes.
Americans do these with actions such as the 14th Amendment of the U.S. Constitution (1868), and various zoning, school & property taxes. Also the Bureau of Land Management (Zoning laws are the first step to government property ownership)

2. A heavy progressive or graduated income tax.
Americans know this as misapplication of the 16th Amendment of the U.S. Constitution, 1913, The Social Security Act of 1936.; Joint House Resolution 192 of 1933; and various State "income" taxes. We call it "paying your fair share".

4. Confiscation of the property of all emigrants and rebels.
Americans call it government seizures, tax liens, Public "law" 99-570 (1986); Executive order 11490, sections 1205, 2002 which gives private land to the Department of Urban Development; the imprisonment of "terrorists" and those who speak out or write against the "government" (1997 Crime/Terrorist Bill); or the IRS confiscation of property without due process. Asset forfeiture laws are used by DEA, IRS, ATF etc...).

7. Extension of factories and instruments of production owned by the state, the bringing into cultivation of waste lands, and the improvement of the soil generally in accordance with a common plan.
Americans call it corporate capacity, The Desert Entry Act and The Department of Agriculture… Thus read "controlled or subsidized" rather than "owned"… This is easily seen in these as well as the Department of Commerce and Labor, Department of Interior, the Environmental Protection Agency, Bureau of Land Management, Bureau of Reclamation, Bureau of Mines, National Park Service, and the IRS control of business through corporate regulations.

8. Equal liability of all to labor. Establishment of industrial armies, especially for agriculture.
Americans call it Minimum Wage and slave labor like dealing with our Most Favored Nation trade partner; i.e. Communist China. We see it in practice via the Social Security Administration and The Department of Labor. The National debt and inflation caused by the communal bank has caused the need for a two "income" family. Woman in the workplace since the 1920's, the 19th amendment of the U.S. Constitution, the Civil Rights Act of 1964, assorted Socialist Unions, affirmative action, the Federal Public Works Program and of course Executive order 11000.

9. Combination of agriculture with manufacturing industries, gradual abolition of the distinction between town and country, by a more equitable distribution of population over the country.
Americans call it the Planning Reorganization act of 1949 , zoning (Title 17 1910-1990) and Super Corporate Farms, as well as Executive orders 11647, 11731 (ten regions) and Public "law" 89-136. These provide for forced relocations and forced sterilization programs, like in China.

10. Free education for all children in public schools. Abolition of children's factory labor in its present form. Combination of education with industrial production.
Americans are being taxed to support what we call 'public' schools, but are actually "government force-tax-funded schools " Even private schools are government regulated. The purpose is to train the young to work for the communal debt system. We also call it the Department of Education, the NEA and Outcome Based "Education" . These are used so that all children can be indoctrinated and inculcated with the government propaganda, like "majority rules", and "pay your fair share". WHERE are the words "fair share" in the Constitution, Bill of Rights or the Internal Revenue Code (Title 26)?? NO WHERE is "fair share" even suggested !! The philosophical concept of "fair share" comes from the Communist maxim, "From each according to their ability, to each according to their need! This concept is pure socialism. ... America was made the greatest society by its private initiative WORK ETHIC ... Teaching ourselves and others how to "fish" to be self sufficient and produce plenty of EXTRA commodities to if so desired could be shared with others who might be "needy"... Americans have always voluntarily been the MOST generous and charitable society on the planet.

Most Americans Still Don't Understand The 'Depths Of Hell Levels Of Authoritarianism' ..