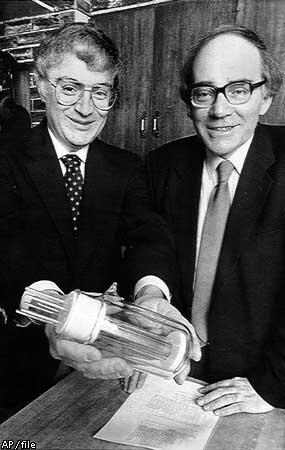 Cold fusion refers to a proposed nuclear fusion process of unknown mechanism offered to explain a group of disputed experimental results first reported by Martin Fleischmann and Stanley Pons. Cold fusion, under this definition, was first announced on March 23, 1989, when Fleischmann and Pons reported producing nuclear fusion in a tabletop experiment involving electrolysis of heavy water on a palladium (Pd) electrode. They reported anomalous heat production ("excess heat") of a magnitude they asserted would defy explanation except in terms of nuclear processes. They further reported measuring small amounts of nuclear reaction byproducts, including neutrons and tritium. These reports raised hopes of a cheap and abundant source of energy.