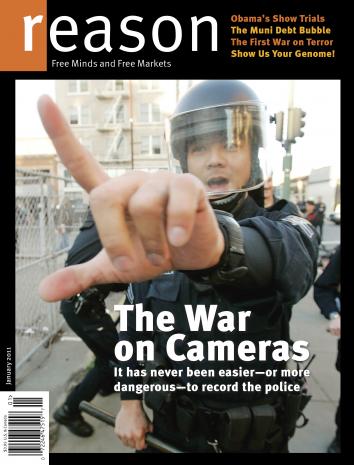 Michael Allison, a 41-year-old backyard mechanic from southeastern Illinois, faces up to 75 years in prison for an act most people don’t realize is a crime: recording public officials.

Allison lives in Bridgeport, Illinois, and often spends time at his mother’s house in Robinson, one county to the north. Both towns have abandoned property (or “eyesore”) ordinances prohibiting the parking of inoperable or unregistered vehicles on private property except in enclosed garages. These rules place a substantial burden on hobbyists like Allison; to obey the law he must either build a garage—which he says isn’t an option, given his property and his income—or register, plate, and pay insurance on every car he fixes up, even though he never drives them on public roads. So Allison kept working on his cars, and the city of Bridgeport kept impounding them: in 2001, 2003, and 2005.