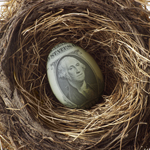 The nest-egg myth ... Nearly half of today's older Americans receive no income from assets such as stocks and savings accounts. As the debate over the federal deficit heats up, Americans are going to hear a great deal about "greedy geezers" who are supposedly bankrupting the nation with Social Security and Medicare. Politicians will no doubt be more circumspect than former Wyoming Sen. Alan Simpson, who, as the Republican co-chairman of the federal deficit commission, described Social Security as a "milk cow with 310 million tits." The myth underlying these attacks (including Simpson's misogynist bovine metaphor) is that most old people don't need their entitlements — that they are affluent pickpockets fleecing younger Americans. – LA Times