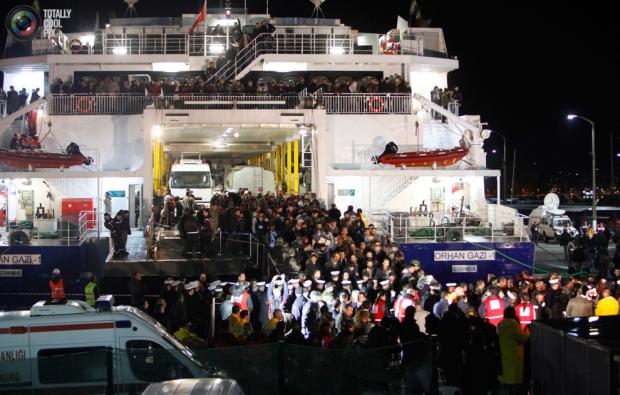 From ships to airplanes to vans, foreigners are fleeing the violence in Libya by any means possible, reports AP. Hundreds of U.S. citizens on a ferry bound for Malta could not leave Tripoli on Wednesday due to high seas. The U.K. government had to borrow a plane from BP to rescue its citizens from Tripoli after a mechanical failure grounded the plane the government had planned to send, reports the Daily Telegraph. 170 British oil workers are still stuck in the deserts and unable to get to the airport. "These camps are remote, they're isolated, they are scattered over a large distance, they're dependent for food or water on supplies from Libyan cities that have been severely disrupted by the violence and unrest," said British Foreign Secretary William Hague. "They are in a perilous and frightening situation." Two Turkish ships rescued 3,000 of the country's 25,000 citizens in Libya, many of whom work on construction sites. More than 12 countries, including Russia, China, Germany, and Ukraine, sent planes to rescue their nationals. As governments worked to evacuate their citizens, chaos engulfed Tripoli airport, where stranded passengers desperately tried to get on the few flights leaving the country Wednesday. "It was just terrible. People fighting for their lives, scrambling over people, pushing, shoving, kicking, everything. It was a mess," said a passenger from Malta who managed to get on a flight. China is preparing to remove 30,000 Chinese workers on a plane and a Greek ship. Meanwhile, Italy is fretting over the prospect of 300,000 Africans landing on its shores as they flee conflict in Libya.