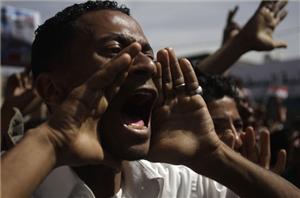 Ali Abdullah Saleh, Yemen's president, has issued a directive ordering his security forces to protect demonstrators trying to end his 32-year rule, after at least 15 people have been killed in the country's recent unrest.

The statement, relayed by the Yemeni press attaché in Washington on Thursday, said Saleh had "demanded security services to offer full protection for the demonstrators".

"Late this evening [Wednesday] ... Saleh instructed all security services to thwart all clashes and prevent direct confrontation between pro- and anti-government protesters," it said.