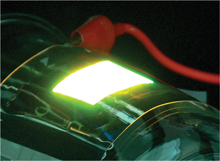 Researchers at Samsung Electronics have made the first full-color display that uses quantum dots. Quantum-dot displays promise to be brighter, cheaper, and more energy-efficient than those found in today's cell phones and MP3 players.

Samsung's four-inch diagonal display is controlled using an active matrix, which means each of its color quantum-dot pixels is turned on and off with a thin-film transistor. The researchers have made the prototype on glass as well as on flexible plastic, as reported in Nature Photonics this week. "We have converted a scientific challenge into a real technological achievement," says Jong Min Kim, a fellow at the Samsung Advanced Institute of Technology.