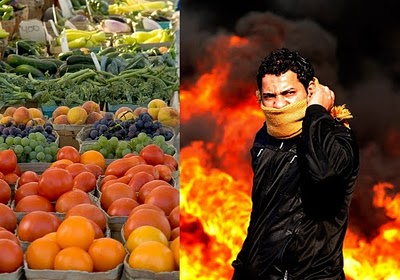 Believe it or not, growing your own food or visiting your local farmers market is more revolutionary and constructive
than burning down your own city and killing security forces.

As Washington plunges the Middle East and North Africa into chaos, and city by city collapses into the hands of globalist stooges, many have mistakenly interpreted this “change” as a positive transformation.

On the contrary, the regimes that will replace the embattled nationalistic dictators in each nation the globalists despoil will interface not with the national governments in the service of their people, but will interface with the “civil society” underlay the Western backed NGOs have meticulously built up over decades. This “civil society” will in turn answer to corporate serving globalist institutions, like the IMF, WTO, World Bank and the UN, instituting crushing economic “liberalization.”

We have been given a prepackaged ideal of what “revolution” is supposed to look like. So when we see people in the streets battling security forces, waving flags, all within the backdrop of their burning society, we are satisfied that “revolution” is taking place. But the reality is, this is not a revolution by any stretch of the imagination. It is a high-tech, high-speed invasion and subjugation, a corruption of the sovereign state similar to what Tacitus described in Roman conquered Britannia.

‘His object was to accustom them to a life of peace and quiet by the provision of amenities. He therefore gave official assistance to the building of temples, public squares and good houses. He educated the sons of the chiefs in the liberal arts, and expressed a preference for British ability as compared to the trained skills of the Gauls. The result was that instead of loathing the Latin language they became eager to speak it effectively. In the same way, our national dress came into favour and the toga was everywhere to be seen. And so the population was gradually led into the demoralizing temptation of arcades, baths and sumptuous banquets. The unsuspecting Britons spoke of such novelties as ‘civilization’, when in fact they were only a feature of their enslavement.’

As we can see, “civil society” is not a new idea, nor is the concept of lulling a population into decadence and complacency while rolling them into a corrupt, exploitative domineering empire.