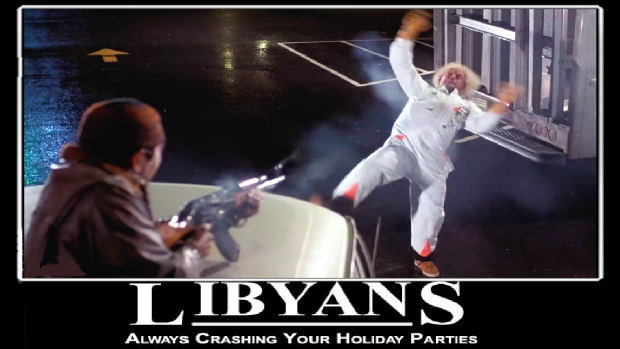 The United States government cannot get enough of war.  With Libyan dictator Moammar Gadhafi’s regime falling to a rebelling population, CNN reports that a Pentagon spokesman said that the U.S. is looking at all options from the military side.

Allegedly, the Pentagon, which is responsible for one million dead Iraqis and an unknown number of dead Afghans and Pakistanis, is concerned about the deaths of 1,000 Libyan protesters.

While the Pentagon tries to figure out how to get involved in the Libyan revolt, the commander of U.S. forces in the Pacific is developing new battle plans to take on China in her home territory. Four-star Admiral Robert Willard thinks the U.S. should be able to whip China in its own coastal waters.

The admiral thinks one way to do this is to add U.S. Marines to his force structure so that the U.S. can eject Chinese forces from disputed islands in the East and South China seas.

It is not the U.S. who is disputing the islands, but if there is a chance for war anywhere, the admiral wants to make sure we are not left out.

The admiral also hopes to develop military ties with India and add that country to his clout. India, the admiral says, “is a natural partner of the United States” and “is crucial to America’s 21st-century strategy of balancing China”. The U.S. is going to seduce the Indians by selling them advanced aircraft.

If the plan works out, we will have India in NATO helping us to occupy Pakistan and presenting China with the possibility of a two-front war.

The Pentagon needs some more wars so there can be some more “reconstruction.”

Reconstruction is very lucrative, especially as Washington has privatized so many of the projects, thus turning over to well-placed friends many opportunities to loot.  Considering all the money that has been spent, one searches hard to find completed projects. The just released report from theCommission on Wartime Contracting can’t say exactly how much of the $200,000 million in Afghan“reconstruction” disappeared in criminal behavior and blatant corruption, but $12,000 million alone was lost to “overt fraud.”