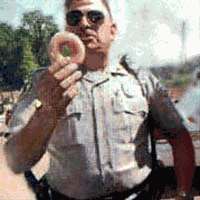 A Canadian man who videotaped two cops sleeping in their squad car ended up getting ticketed and fined.

Now the cops are under investigation as the video has gone viral.

Maxime Carpentier said he was driving by when he saw the cop car parked with the engine running, but didn't see anybody inside.

He parked and walked up to the car to find the two officers in deep slumber with their seats titled back, including one who was curled up in the fetal position.

One of the cops woke up, then demanded his driver license, even though Carpentier wasn't driving at the time.