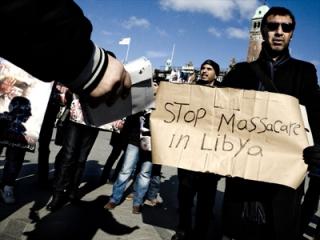 According to Rasmussen, a large majority of Americans agree with the common sense of George Washington. During his farewell address, the first president of the United States said the nation should beware of foreign entanglements.

On February 23, Rasmussen reported that 67% of Americans strongly believe the United States should stay out of Libya and the Middle East.

1 Comments in Response to Most Americans Strongly Oppose U.S. Military Action in Libya

US treaties with the International Monetary Fund and other countries require that we police the world.

The funds are accumulated through our income taxes... funds that go to the IMF through the Federal Reserve Bank.

The income taxes are mandatory if we have a Social Security Number. But we almost can't live anymore without one.

So what difference does it make what the vast majority of Americans think. Our hands are tied through taxes and treaties.