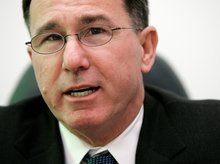 Comment: Islamic militants, China, Russia, Iran, Hugo Chavez, Santa Claus, The tooth fairy, Barney the purple dinosaur – anyone and everyone is to blame, according to the Pentagon, except for the real financial terrorists still running the Federal Reserve and the U.S. Treasury.

Evidence outlined in a Pentagon contractor report suggests that financial subversion carried out by unknown parties, such as terrorists or hostile nations, contributed to the 2008 economic crash by covertly using vulnerabilities in the U.S. financial system.

The unclassified 2009 report “Economic Warfare: Risks and Responses” by financial analyst Kevin D. Freeman, a copy of which was obtained by The Washington Times, states that “a three-phased attack was planned and is in the process against the United States economy.”

While economic analysts and a final report from the federal government’s Financial Crisis Inquiry Commission blame the crash on such economic factors as high-risk mortgage lending practices and poor federal regulation and supervision, the Pentagon contractor adds a new element: “outside forces,” a factor the commission did not examine.