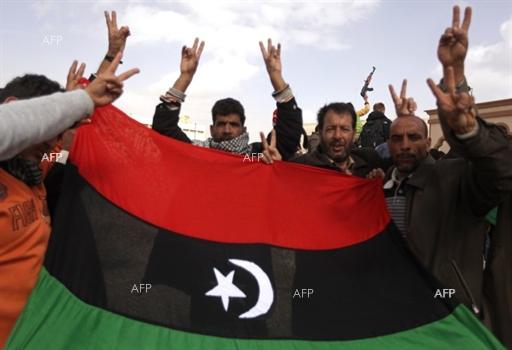 Libyan rebels fought off an onslaught by dictator Col. Muammar el-Qaddafi during six hours of fierce battle overnight, reports the Wall Street Journal. The fighting occurred in Zawiya after pro-Qaddafi forces descended on the city from six directions. Rebels awaited them with tanks, machine guns, and anti-aircraft weaponry contributed by army defectors. "We will not give up Zawiya at any price," said one government opponent who witnessed the clash. "We managed to defeat them because our spirits are high and their spirits are zero." Since Monday, Qaddafi has targeted rebels in a desperate, violent attempt to cling to power. While rebels stopped Qaddafi from capturing Zawiya, the dictator still controls the capital, Tripoli, and neighboring cities. Meanwhile, the U.S. and Britain are positioning for a possible military intervention to prevent civil war and a humanitarian disaster, reports the Guardian. The U.S. Navy moved warships into position, while the U.K.'s Prime Minister David Cameron called on his defense ministers to draw up a plan for a no-fly zone. Cameron also said the UK may hand over arms to the Libyan rebels if Qaddafi's attacks continue. Still, those pushing for intervention face obstacles. Any such move would have to be approved by the U.N. Security Council, and both China and Russia have argued against the involvement of outside powers, reports the Guardian. Despite the overwhelming international pressure on Qaddafi to relinquish power, the Libyan dictator remained defiant on Monday. "All my people love me," he told the BBC. "This is al-Qaeda, not my people. They come from the outside."