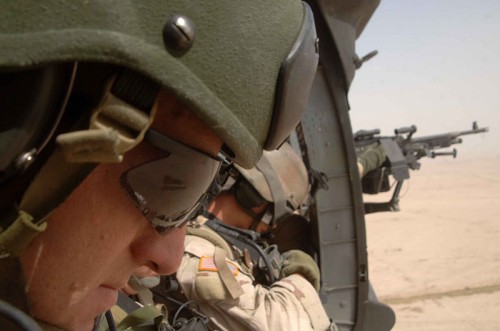 US Special Forces have reportedly landed in Libya to train anti-Gaddafi rebels as a western-backed coup d’état in the oil-rich nation nears, with British and French “defense advisors” also arriving to set up training bases in the rebel-controlled eastern region of the country.

According to a report in the Pakistan Observer, hundreds of special forces personnel from the US, Britain and France arrived on February 23 and 24 in “American and French warships and small naval boats off Libyan ports of Benghazi and Tobruk.”

The article states that the report was confirmed by a Libyan diplomat in the region, who said that “The three Western states have landed their special forces troops in Cyrinacia and are now setting up their bases and training centres,” in a bid to bolster rebel forces resisting Gaddafi’s militia in the surrounding region.

“The Western forces are reportedly preparing to set-up training bases for local militias set-up by the rebel forces for an effective control of the oil-rich region and counter any push by pro-Qaddafi forces from Tripoli,” states the report.

4 Comments in Response to Report: US Special Forces Arrive In Libya

The reason for this is while Libya doesn't have the most oil in all the world, it certainly the most valuable. Libyan sweet light crude is the world's easiest (cheapest) to refine, easiest (cheapest) to extract and due to its properties, produces a higher percentage of plastics and other desirable petro-based products than oil produced elsewhere in the earth's crust. Thusly, the oil in Libya is worth more than oil elsewhere, making it more attractive/necessary to sieze.

Just another example of what happens when you put a boy in the White House to do a man's job.

Advisors?  EXACTLY how we started in Viet Nam

More Evidence That The West Sabotaged Peace In Ukraine

Putin issues threat to US: Vladimir says 'we will deploy more than tanks'...

Fulford full newsletter 1/30: "The Ukraine has fallen, Israel and Switzerland are next"