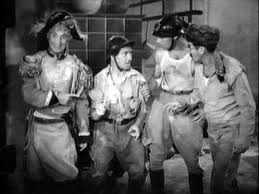 Robert Gates’ proposed Pentagon spending cuts are likely to have as much effect of the deficit as flushing your toilet has on El Nino.  Recent announcements of the military’s new age of austerity were the same balderdash we’ve been hearing from the warmongery’s bull feather merchants since President Dwight Eisenhower warned us, in his 1962 farewell speech, that the emergence of a military-industrial complex could lead to a “disastrous rise of misplaced power.”
The headline of a Jan. 6 Associated Press piece trumpeted “Pentagon To Cut Spending For First Time Since 9/11.”  The lead paragraph informed us that the Pentagon plans to freeze its budget, in part by shrinking the Army and Marine Corps—the two services we just got done expanding—and by screwing veterans with increases in their health care costs.
But in the second paragraph of the AP story we get a sniff of the truth: “The Pentagon says it can stop asking for annual budget increases in 2015.”  Oh, I see.  The number fumblers in the five-sided funny farm have been milking this parlor amusement for a long, long time.  They promise economies tomorrow for a hamburger today.  Come tomorrow, the economies have disappeared and so has the hamburger.