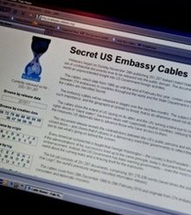 OSLO (Reuters) - Anti-secrecy website WikiLeaks, the Internet and a Russian human rights activist are among a record 241 nominations for the 2011 Nobel Peace Prize.

"Looking at the long term, we can say interest in the prize is strong and growing along with the number of candidates," Geir Lundestad, a non-voting member of the Nobel panel, told Reuters.