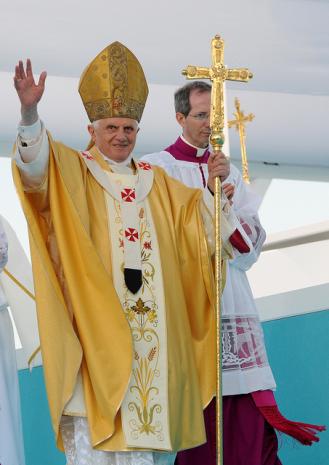 In the second book in his series Jesus of Nazareth, set for release on March 10, Pope Benedict XVI says that the Jews are not collectively responsible for the death of Jesus Christ, reports the Associated Press.

Though it is not the first time the Church has made that argument -- in 1965, the Vatican's Nostra Aetate stated that Jesus' death could not be collectively be attributed to either the Jews of the era or those alive today -- scholars believe that the reminder in a more accessible media form could assist in combating modern-day anti-Semitism.

It's not the first time in recent months that the Pope, widely considered the conservative choice after the death of John Paul II, has made waves for stances considered progressive for the modern Catholic Church.

5 Comments in Response to Pope: Jews Are Not Responsible For The Death Of Jesus

Yeah ..." we are screwed up"!!! Al Qaeda terrorists are not responsible for the death of more than 6,000 innocent Americans on ground zero. We are. Remember the politically correct politician who said this?How can we blame 911 on terrorists and at the same time proud of the security infrastructure we created in the name of this infamy, the only reason why you and I are still alive today? We owe our lives to them. Like Christians in the Bible, we are saved by the cruelty of the Jews for nailing Christ on the Cross, and saved by the savagery of Al Qaeda for blowing up New York and the Pentagon!

Of course the Jews killed Jesus. The Romans gave the decision to do so. Come on, Christians owe the Jews a favor! What would Chrisianity be without Jesus' tourure and death on the cross? He had to die for your sins, how else could this happen? I mean if you live in a universe where Jesus' death obsolves you of your sins, you can't both hate Jews and Romans for killing your messiah, and at the same time define your salvation on the very same act. If you hate Jews for killing Jesus and think that you are saved because of his death that is so screwed up on so many levels. No wonder the world is so screwed up.

Same Pope who said that in the war of terror dead Palestinians are martyrs of Antichrist violence that should stop. What about dead Israelis when Palestinian terrorists strike in Jerusalem? Perhaps in the mind of this Pope they must be Illuminati with deist and Republican ideas that threaten the Vatican!  Next Pope please ...

Odd....The Big Papa rules that Jews are not collectively responsible for the death of Jesus Christ....yet....he still holds all infants born are guilty of the original sin.....odd.