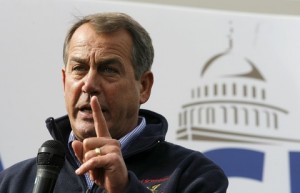 UPDATE: In a 335 to 91 vote, the House on Tuesday approved a package of legislation that would reduce spending by $8 billion and still provide funding for Congress through March 18.

The legislation now heads to the Senate, where it is expected to pass easily.

While the measure would appear to be the stop-gap needed to prevent a government shutdown on Friday, it's still unclear whether Republicans and Democrats would be able to compromise during the intervening two weeks.