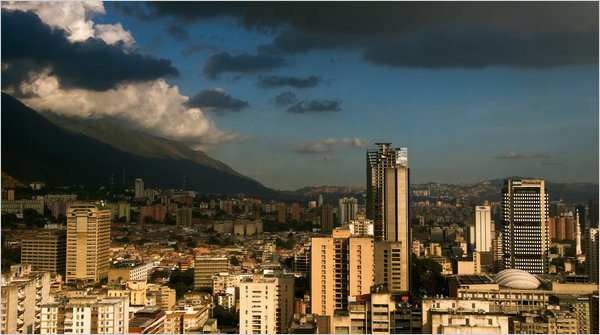 The office tower, one of Latin America’s tallest skyscrapers, was meant to be an emblem of Venezuela’s entrepreneurial mettle. But that era is gone. Now, with more than 2,500 squatters making it their home, the building symbolizes something else entirely in this city’s center.

The squatters live in the uncompleted high-rise, which lacks several basic amenities like an elevator. The smell of untreated sewage permeates the corridors. Children scale unlit stairways guided by the glow of cellphones. Some recent arrivals sleep in tents and hammocks.

The skyscraper, surrounded by billboards and murals proclaiming the advance of President Hugo Chávez’s “Bolivarian revolution,” is a symbol of the financial crisis that struck the country in the 1990s, the expanded state control over the economy that came after Mr. Chávez took office in 1999 and the housing shortage that has worsened since then, leading to widespread squatter takeovers in this city.

Yet squatters, who live on 28 stories and plan to go higher, have created a semblance of order within the skyscraper they now call their own. Sentries with walkie-talkies guard entrances. Each inhabited floor has electricity, jury-rigged to the grid, and water is transported up from the ground floor.

Strivers abound in the skyscraper. They chafe at being called “invaders,” the term here for squatters, preferring the less contentious word “neighbor.” A beauty salon operates on one floor. On another, an unlicensed dentist applies the brightly colored braces that are the rage in Caracas street fashion. Almost every floor has a small bodega.

Julieth Tilano, 26, lives inside a small shop on the seventh floor with her husband and in-laws. They sell everything from plantains to Pepsi and Belmont cigarettes. Her husband, Humberto Hidalgo, 23, has a side business in which he charges children from the skyscraper 50 cents per half-hour to play PlayStation games on the four television sets in the family’s living room.

Some residents own cars parked in the building’s garage. Others sanguinely point to their trim physiques, a result of going up and down the stairs each day. For others, any roof over one’s head is better than none.

Fascism versus Socialism: Take Your Pick

The Absurdity of Socialism | Jordan Peterson and Dave Rubin

Christmas in Venezuela: What It Was Like After Socialism Destroyed the Country