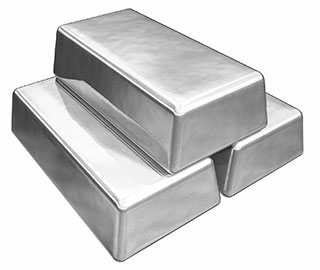 The video is footage of expert resource investor Eric Sprott of Sprott Resources discussing precious metals at Casey Research's excellent Gold & Resource Summit late last year. If you're interested at all in precious metals, Casey's work is a "must-read," and this video is a must-watch.
Eric Sprott is one of the world's best investors… probably the best investor you've never heard of. He specializes in natural resources, and he's a big precious metals bull. He holds 70%-80% of his fund in gold and silver (he says silver is his largest holding). In the video, Sprott makes the most compelling argument to buy silver I've ever heard…

In short, the world is out of silver. Sprott says aggregate investment demand for silver between 2000 and 2009 was 293.8 million ounces (according to the GFMS, the world's foremost precious metals consultancy).

Using his own numbers, Sprott compiled the silver holdings for seven large investors, including himself, iShares Silver Trust, ZKB, GoldMoney, and so on. Just those seven entities own 519.6 million ounces of silver… That's 225.8 million missing ounces. And again… that's only seven investors. It doesn't include central banks, individuals, hedge funds, etc.

It's obvious, as Sprott notes, silver data has been "very, very misstated." Sprott ends his speech saying, "There's $22 billion of silver available in the world, of which the ETFs already own half... and between you guys and us, we probably own the other half... which means there's nothing left."

Sprott's comments remind me of a conversation I had with a friend this week… My friend is one of the largest gold and silver coin dealers in the country. He said he hopes silver retreats, because the coins are going crazy. "People have no idea how small the market is," he said. "I've seen prices jump 10% in the last week."

Sprott's argument only takes the investment demand for silver into account. And while investors do hoard silver, more than 95% of today's demand for silver comes from industry. And when that silver is consumed, it's gone forever. Silver's current production is just enough to meet the industrial demand. In other words, there is virtually zero new silver available for investment purposes.