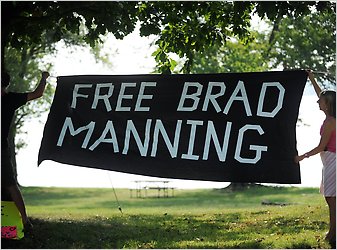 A lawyer for Pfc. Bradley Manning, the Army intelligence analyst accused of leaking secret government files to WikiLeaks, has complained that his client was stripped and left naked in his cell for seven hours on Wednesday.

“This type of degrading treatment is inexcusable and without justification,” Mr. Coombs wrote. “It is an embarrassment to our military justice system and should not be tolerated. Pfc. Manning has been told that the same thing will happen to him again tonight. No other detainee at the brig is forced to endure this type of isolation and humiliation.”

1 Comments in Response to Soldier in Leaks Case Was Jailed Naked, Lawyer Says

Regardless of how you feel about the validity of wikileaks, all government should be transparant.. This highly patriotic soldier saw something wrong and reported it. He is not  traitor, he is a hero and should be commended as such. He should also be protected under the whistle blower statutes. The government must be held accountable. I see treason in the air.