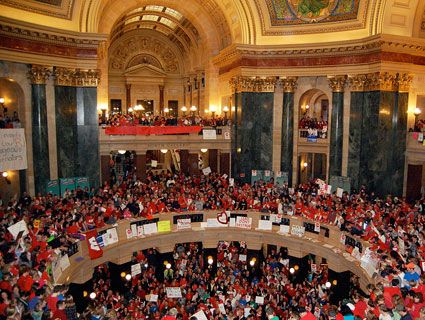 MADISON, Wis. - A Wisconsin judge has ordered pro-union protesters to be removed from the state Capitol.

Dane County Circuit Judge John Albert ruled Thursday night that protesters remaining in the building should be immediately removed — along with any unauthorized materials such as sleeping bags and signs taped to the Capitol walls.

The judge also ruled that the state violated constitutional protections for free speech and assembly by restricting access to the building. He ordered the administration to re-open the building to the general public by 8 a.m. Monday, allowing for a permitting process limiting the times and places where rallies can be held.