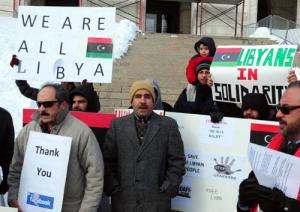 From the very beginning the US-backed Libyan unrest played out in oafish measures, crutched along by the most irresponsible, intellectually dishonest “journalism” to date. A week before the unrest began, it was the the London based National Conference of Libyan Opposition (NCLO) that called for the February 17th “Day of Rage,” not Libyans in the streets of Tripoli or Benghazi.

The NCLO itself was created in London in 2005 by Ibrahim Sahad and his National Front for the Salvation of Libya (NFSL), which in turn has been one of the leading Libyan opposition groups since the 1980′s. The Daily Globe and Mail has reported that Sahad’s NFSL had been behind several attempted armed uprisings and assassination attempts against Qaddafi in the 1980′s, while records found in the US Library of Congress indicate Sahad’s NFSL had CIA support and training.