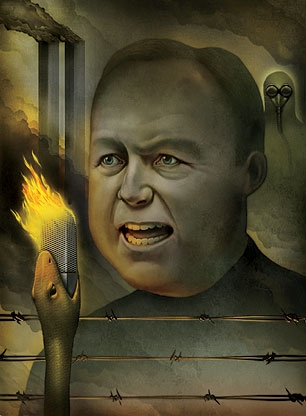 Alex Jones is overthrowing the ‘global Stasi Borg state,’ one alternative theory at a time.

It’s just past 9 a.m. when Alex Jones pulls his Dodge Charger into a desolate parking lot in Austin. From the outside, the squat, single-story office complex that Jones calls his “command center” resembles a moon base surrounded by fields of dying grass. But inside, blinking banks of high-tech recording gear fill the studio where he broadcasts The Alex Jones Show, a daily talk show that airs on 63 stations nationwide. Jones draws a bigger audience online than Rush Limbaugh and Glenn Beck combined — and his conspiracy-laced rants make the two hosts sound like tea-sipping NPR hosts on Zoloft.
A stocky 37-year-old with a flop of brown hair and a beer gut, Jones usually bounds into the studio, eager to launch into one of his trademark tirades against the “global Stasi Borg state” — the corporate-surveillance prison planet that he believes is being secretly forged by an evil cabal of bankers, industrialists, politicians and generals.
This morning, though, Jones looks deflated. Five days ago, a mentally disturbed 22-year-old named Jared Loughner opened fire on a crowd in Tucson, Arizona, killing six and seriously wounding Rep. Gabrielle Giffords. Loughner was reported to be a fan of Loose Change, a film Jones produced that has become the bible for those who believe 9/11 was an inside job.