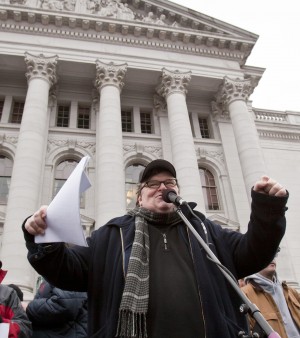 Protesters in Madison have "aroused a sleeping giant" in the national fight for workers' rights, filmmaker Michael Moore told thousands at the Capitol Square on Saturday, as rallies opposing Gov. Scott Walker's budget proposals wrapped up their third week.

"Right now the Earth is shaking and the ground is shifting under the feet of those who are in charge," said Moore, the Oscar-winning maker of "Bowling for Columbine," whose documentaries also include "Fahrenheit 911" and "Capitalism: A Love Story."

"America is not broke ... Wisconsin is not broke," Moore said. "The only thing that's broke is the moral compass of the rulers."

Police estimated the crowd at 30,000 to 40,000, less than the past two Saturdays. Moore urged those gathered not to retreat. "You are not alone," he said. "America is with you."