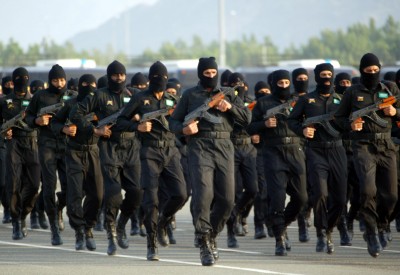 Saudi Arabia was yesterday drafting up to 10,000 security personnel into its north-eastern Shia Muslim provinces, clogging the highways into Dammam and other cities with busloads of troops in fear of next week’s “day of rage” by what is now called the “Hunayn Revolution”.

Saudi Arabia’s worst nightmare – the arrival of the new Arab awakening of rebellion and insurrection in the kingdom – is now casting its long shadow over the House of Saud. Provoked by the Shia majority uprising in the neighbouring Sunni-dominated island of Bahrain, where protesters are calling for the overthrow of the ruling al-Khalifa family, King Abdullah of Saudi Arabia is widely reported to have told the Bahraini authorities that if they do not crush their Shia revolt, his own forces will.

The opposition is expecting at least 20,000 Saudis to gather in Riyadh and in the Shia Muslim provinces of the north-east of the country in six days, to demand an end to corruption and, if necessary, the overthrow of the House of Saud. Saudi security forces have deployed troops and armed police across the Qatif area – where most of Saudi Arabia’s Shia Muslims live – and yesterday would-be protesters circulated photographs of armoured vehicles and buses of the state-security police on a highway near the port city of Dammam.