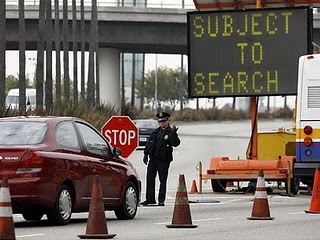 We have WON every time they have attempted this in Texas. The TX and US Supreme CT has ruled the practice of road checkpoints unconstitutional, but that hasn’t stopped the Locals and the Feds from trying over, and over, and over again. From DUI checkpoints, to immigration, to drug trafficking, and now “unlicensed” drivers… The well is deep and long. (Personally I have not had a license for 12 years, and have not had an accident in 25)

This “Hegelian” con job to convince the people that they need this kind of protection is so weak, that Texans have rejected it again and again…. Of course this hasn’t detoured the State and local police from setting up “Virtual Checkpoints”, meaning that they simply hide and lay in wait for anything “suspicious” (key word here is “anything”) and use any excuse to pounce on “law abiding” citizens; whom are all considered guilty until proven innocent. Proving One’s self “innocent” is very expensive BTW… (Unless you are the powerful beneficiary of the notorious arbitrary and selective, political nature of laws in general)