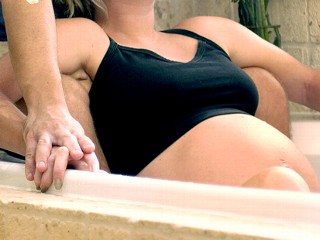 CDC Study Says Home Births on the Rise in U.S.
An Uncommon Practice May Be Increasing
BY JOSEPH BROWNSTEIN ABC NEWS MEDICAL UNIT

She had two more children, and she chose to have both of them at home.

"When I had my first child in the hospital, I was young and I didn't know of anyalternatives. It wasn't a real positive experience," said Jacobs, who now works as the office manager at Mat-Su Midwifery in Wasilla, Alaska. "It was a stark, very impersonal feeling, treating me like I was sick and not pregnant."

Jacobs explained she believed she had more control over many aspects of the birthwhen it took place at home, including whether she got to be with the baby after delivery and having the siblings there at the birth.

"Doing a home birth, I felt like I had a say," said Jacobs. "This is not the hospital's baby. This is my baby."

New numbers released today by the Centers for Disease Control and Prevention indicate that a very small but slightly growing number of women are making the same choice that Jacobs did. While less than 1 percent of all births in the United States take place outside the hospital, the number of those births taking place at home has increased by 3.5 percent between 2003-04 and 2005-06, according to the new report. The stats say there were 46,371 home births in 2003-04, and 49,438 home births in 2005-06.

"They're still not that common, but we did see some increase," said Marian MacDorman, a statistician at the CDC's Nation Center for Health Statistics and one of the study's authors.

The new numbers came after a period in which births outside the hospital, which can include births at a birthing center or in a doctor's office, as well as home births, had been decreasing since 1990.

Some of the breakdowns behind the new numbers suggest that the most recent trend might be a negative reaction to a hospital birth experience, since the majority of mothers choosing a home birth have had children before.

"The fact that it's primarily women who had kids before and had birth in hospitals before, certainly suggests it's a reaction to their prior birth," said Eugene Declercq, a professor of community health sciences at the Boston University School of Public Health, and a author of the study. "It certainly suggests it's an experience they don't want to repeat."
Finance Not A Likely Driving Force
Home births may cost only a quarter or a third of what a hospital birth costs -- $7,737 for a vaginal delivery, $10,958 for a C-section, according to a 2004 March of Dimes study -- but finances do not appear to be a prime reason for choosing home births.

The CDC's numbers appear to suggest that finances are not a driving force, since mothers who are older and better educated seem to choose home birth most often.

"I suspect that economic issues are not the main issues," Eileen Ehudin Beard, a nurse and senior practice adviser for the American College of Nurse-Midwives. "I suspect consumers are becoming more informed … and seeing home births are a safe alternative for healthy women with a qualified provider."

She said a likely cause of any increase is a desire to avoid the interventions hospitals perform, ranging from cesarean sections and epidurals to controlling when the mother is with the newborn.

"I think a lot of consumers are really scared by the high cesarean rate, and they're becoming aware that Caesarian is a major surgical procedure," said Beard.

She stressed that home birth is only a safe option for healthy mothers who are not expected to have complications.
A Dearth of Evidence About Safety of Home Births

The American College of Obstetricians and Gynecologists has long opposed home births, citing a lack of data regarding their safety.

"Studies comparing the safety and outcome of U.S. births in the hospital with those occurring in other settings are limited and have not been scientifically rigorous," according to the organization's 2007 statement.

It goes on to say that, "Until the results of such studies are convincing, ACOG strongly opposes home births. Although ACOG acknowledges a woman's right to make informed decisions regarding her delivery, ACOG does not support programs or individuals that advocate for or who provide home births."

While the risk of neonatal death is low overall, it may be higher at home births and that is a problem, said Dr. William Barth, Jr., chair of ACOG's committee on obstetrics practice and chief of the division of maternal-fetal medicine at Massachusetts General Hospital

"It's one of those situations where overall the risk is low, but it is increased two to three-fold," he said. "Even though it's a rare outcome, it is a catastrophic outcome. It's preventable in that it is less likely in the hospital."

Explaining his stance, Barth cites a study presented by researchers from Maine Medical Center at the Society for Maternal-Fetal Medicine meeting in Chicago in early February. The study, a meta analysis of research from around the country comparing home births to hospital births, appeared to show a twofold increase in the rare event of neonatal death at a home births.

Declercq said one problem with relying on this study is the results may have been skewed because the researchers relied on the location the birth was planned for rather than where it actually took place.

While the gold standard of clinical research is the double-blind, placebo-controlled, randomized clinical trial, it is impossible to blind a mother to whether she is giving birth at home or in a hospital, and most mothers are unwilling to be randomized to a home birth or hospital birth.

Studies of home versus hospital birth are typically the less reliable cohort study, where women who chose one option or the other but have otherwise similar characteristics are compared.

Barth said that an attempt to run a randomized controlled trial of home versus hospital births had to be canceled because only 11 mothers signed up.

Home birth advocates have cited several studies supporting the safety of home births among low-risk women. However, those studies have taken place in the Netherlands and Canada.

Barth said its unrealistic to apply the findings to the United States.

"Those are highly regulated, highly integrated systems. Their system is prearranged -- it's very different from the systems available in the United States," he said.

Agreeing with that notion, Declercq argued that it is the lack of such a setup that keeps safer home births from being a bigger option in the United States.

"In the United States, people who want to have a home birth have to fight the system," he said, explaining that there is a lack of support for a midwife who decides a patient is too high-risk for a home birth and should be transferred to a hospital.

"I think if you actually move to a system like that, it would be fine in the United States, because the evidence from other countries suggests that it is as well," said Declercq.

Looking at the numbers, he said, adopting such a system probably wouldn't lead to widespread home births in the United States. It would not climb to 30 percent like the Netherlands, but would be closer to the rise to 3 percent seen in the United Kingdom.

But for now, he said, it is likely to remain a highly charged issue, with some advocates of home birth irrationally opposing the choice of a hospital while opponents cite risks of home birth while ignoring complications that can happen at a hospital.

"The mothers who are having these home births are not crazy, unaware people," said Declercq. "They plan carefully, they think about this all the time. They think they're better off not having the interventions that they feel will happen unnecessarily at hospitals."

This Christmas: A Letter of Thanks to My Dad