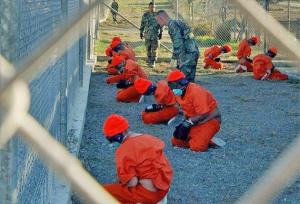 Any last vestiges of doubt that President Barack Obama had abandoned entirely on his election pledge to close down Guantanamo Bay evaporated last night as he gave the green light for military trials there to resume and laid down the rules for holding some of the detainees inside the camp indefinitely.

Another one?!  Black Bush.