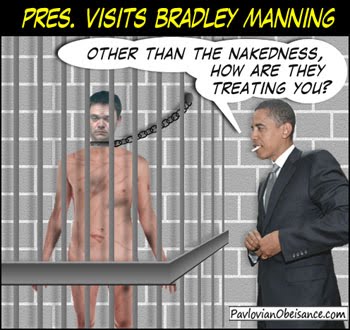 Congressman Dennis Kucinich (D-OH) is today releasing letters from the Secretaries of the Defense and the Army that respond to repeated requests to visit with Private First Class (Pfc.) Bradley Manning, the soldier accused of leaking confidential materials to Wikileaks. Kucinich is releasing the letters after new allegations emerged of Manning being stripped naked and left in his cell for seven hours.

“After initial allegations of mistreatment, I requested a visit with Private Manning to see for myself the conditions of his treatment. Despite the fact that Manning has not been found guilty of any crime, his lawyer reports that he is in isolation 23 out 24 hours every day, conditions which may violate his 8th Amendment protection from ‘cruel and unusual’ punishment. This treatment is in stark contrast to a presumption of innocence and raises questions of whether Pfc. Manning can be fit for trial.” said Kucinich.

“My request to visit with Pfc. Manning must not be delayed further. Today we have new reports that Manning was stripped naked and left in his cell for seven hours. While refusing to explain the justification for the treatment, a marine spokesman confirmed the actions but claimed they were ‘not punitive.’

Alleged WikiLeaks leaker Pfc. Bradley Manning was stripped naked and left on the floor of his cell for seven hours, claimed his lawyer.

Upon being stripped, he was forced to stand naked outside of his sell while Marine guards inspected the area.

“This type of degrading treatment is inexcusable and without justification,” said Manning's lawyer David E. Coombs. “It is an embarrassment to our military justice system and should not be tolerated. Pfc. Manning has been told that the same thing will happen to him again tonight. No other detainee at the brig is forced to endure this type of isolation and humiliation.”