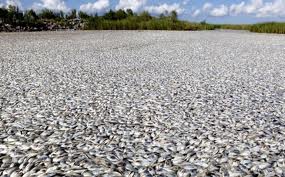 Hundreds of thousands of dead fish were found floating at the water’s surface in Redondo Beach, California on Tuesday, sparking widespread concerns about pollution.

It was unclear what killed the creatures, thought to be anchovies, but authorities speculated the mass quantity of teeming life may have simply absorbed all the oxygen in waters around King Harbor. An investigation was ongoing.