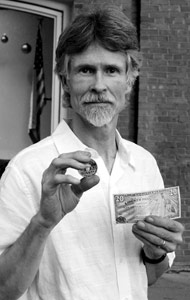 The text below was written by Julia Gaunt, the spouse of Kevin Innes.

My husband, Kevin Innes was arrested on June 2nd 2009. Kevin was the Regional Currency Officer for the Liberty Dollar (LD), an alternative gold/silver based currency which was 10 yrs. in circulation. Kevin was charged with conspiracy, mail fraud, and counterfeiting. His case is complicated by his Canadian Citizen status. He was taken to Charlotte, NC and held in the jail there and considered to be a “flight risk” therefore would not be given bail, bond or release until the Federal trial. He was then moved to Lenoir, NC in Dec. 2009.

Kevin’s cell mates are from all backgrounds to include violent criminals. For those of you who do not know the difference, jail is not prison. There are no work details or privileges in jail, just a 15′X9′ cell with only a window into the “Pod” where card games are the main activity. Guards are not terribly kind, rules are strict and going outside is rare. Jail has many restrictions and there is no moving up or getting a better situation in jail. Kevin being the “incurable optimist” that he is holds his chin up, practices meditation, yoga, and works out in the some 15 hrs. a day he spends in a locked cell.

His other favorite activity is studying and memorizing. He studies to better himself mentally and spiritually. He is memorizing the Tao Te Ching and quotes from it on a regular basis. Kevin writes letters to friends and supporters (read here on MailtoJail.com) and to me, of course.

I speak with him usually several times weekly in short 10 min. conversations usually ending before we can officially say good bye. All calls are recorded, letters read, visits taped. There is no such thing as privacy. I visit him in Caldwell Co. Detention Center (1hr. 20 min. drive) twice monthly for 30 min. only. Kevin also maintains a vegetarian diet which can not be real easy to do considering jail food.

After many months of hope for a speedy trial, plea bargaining became an option however Kevin remained true to his conviction and has continued to hold out for what he believes to be our/ his rights.

The three co-defendants to include Kevin will stand trial in May in the event the LD is not acquitted (jury selection began this week), and if all goes well, as we anticipate it to go, charges will be dropped against them. Bernard von NotHaus, founder and creator of the LD is meeting this trial challenge head on with a very positive attitude and outlook. The judge is Richard Vorhees of the Federal District Court in Statesville, NC. and it is a trial by jury.

Now 21 months since Kevin’s arrest and 3 years since the LD raid and shut down, the Liberty Dollar Trial has begun this March 7th. Go to google, Liberty Dollar News and read up on the latest newsletter from Bernard von NotHaus (founder) as he spells out the last update until the end of the trial which may last 3-4 wks.

Write Kevin through Mail to Jail or at:

Send only letters or cards written or typed, no copies of anything, no pictures, no labels, or tape on envelope. Give him your support. Remember all is open and read.

If you would like to send any monetary support, a special account is open to continue to pay for Kevin’s needs while incarcerated such as storage of his possessions and some basic needs while in jail.

Our greatest hope is that the Liberty Dollar and Bernard von NotHaus will win, a landmark trial will give way to alternative currency Nation wide, Kevin will be turned over to immigration where his petition to establish residency will then be considered. Hopefully Kevin will be able to return to his home in Asheville while immigration status is pending until accepted. The two other co-defendants will go free, all charges dropped.