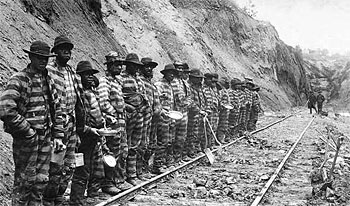 They are paid $0.23 an hour to start, and can work their way up to a maximum of $1.15 to manufacture electronics that go into the propulsion, guidance, and targeting systems of Lockheed Martin’s (LMT) PAC-3 guided missile, originally made famous in the first Persian Gulf conflict.

Unicor, known as Federal Prison Industries until a 1977 re-branding, is a network of over 100 factories at 70 penitentiaries within the US; a self-sustaining, self-funding company owned wholly by the government, created by an act of Congress in 1934 to function as a rehabilitative tool to teach real-world work skills to federal inmates. Unicor’s mandate dictates that prison work programs not adversely affect private sector businesses.

2 Comments in Response to Why are Prisoners Building Patriot Missiles?

Hitler used prisoners to build V-2 rockets.  UNICOR has been using Fed prisoners to compete with private business---that must pay taxes to subsidize the competing prison labor.  Unicor is reported a major investment of the Bush family.

The Chinese military owns most of the businesses in China and employs slave labor in the form of prison labor.  Don't you want to compete against the Chinese?  Why slave labor and government owned corporations; what could be more American than that?  Government knows best and if you disagree you must be a terrorist who needs some work ethic pounded into you.