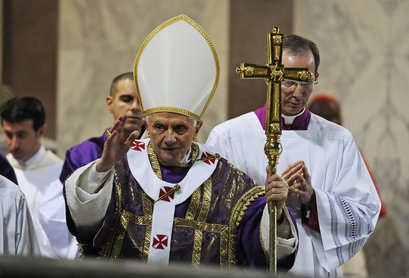 VATICAN CITY (AP) - Pope Benedict XVI rejects the idea of Jesus as a political revolutionary and insists that violent revolution must never be carried out in God's name in a new book being released Thursday amid great fanfare at the start of Lent.

"Jesus of Nazareth - Holy Week: From the Entrance into Jerusalem to the Resurrection," is the second installment of Benedict's planned trilogy on Jesus. Part I, which covered Jesus' early ministry, shot to the top of the best-seller lists in Italy when it was published in 2007.

Already, 1.2 million copies of Part II have been printed in seven languages, and reprints of 100,000 more are planned for the Italian editions and 50,000 in German.

One Nation Under Blackmail:

'Lies My Government Told Me, and the Better Future Coming'

Interview 1764 - One Nation Under Blackmail with Whitney Webb

How To Think About The Economy - with Per Bylund

Stronger Together in Jesus