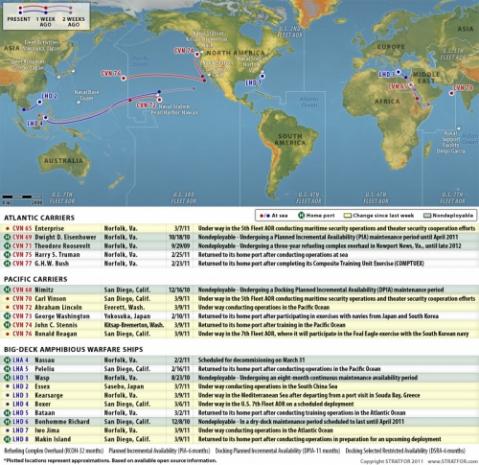 Those who have been following our series of US naval updates will not be surprised to learn that US forces are amassing around Tripoli. The LHD-3 Kearsarge is now within striking distance, and certainly within No Fly Zone enforcement, while the CVN 65, which according to some prior reports had already passed the Suez, is waiting just on the Southern tip of the canal. This is somewhat odd as it indicates that Naval command is still split as to where the Enterprise may be needed more: Libya or off the Persian Gulf where the Vinson is keeping watch for a potential Iran escalation. Of course, should Iran flare up, it is likely that Pakistan, Afghanistan and even India could rapidly go downhill which is why the US will probably need two aircraft carriers before it considers a full on attack against Iran. But the most surprising development was the launch of all three San Diego based aircraft carriers which three weeks ago were all sitting peacefully, their crews binging in the Gaslamp District, and since moving on to new deployment areas, most of which in the Pacific theater. Which means that very soon, the US will promptly need to get the 7 aircraft carriers that are currently at home port back in commission as things are heating up faster than the US can appropriately cover.