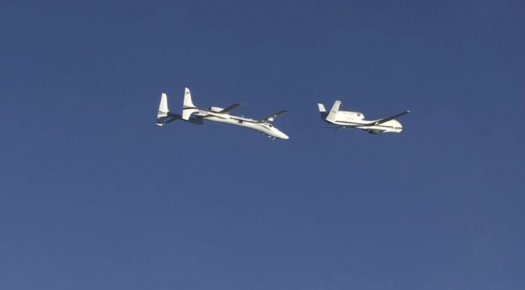 In a recent test of autonomous in-flight refueling, two unmanned aircraft flew within 40 feet of each other at an altitude of 45,000 feet, an aviation record. A Northrop Grumman Proteus test aircraft crept up on a NASA Global Hawk, testing wake turbulence and engine performance in the stratosphere. The test is a step toward teams of drones flying in formation, for refueling or other purposes.

Autonomous aircraft offer plenty of benefits — they can fly long distances at high altitudes, they can take off and land by themselves, etc. — but they’re still not self-sufficient, requiring pit stops to refuel. This will change next year, when Northrop Grumman attempts to refuel two Global Hawk drones in flight, allowing for a week-long journey.