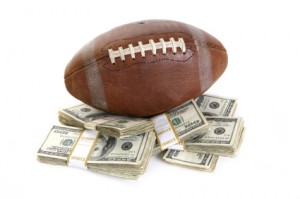 A  critical battle is underway challenging the very heart of the professional sports economics model — and it is not the NFL labor negotiations.  The unlikely fight is between a struggling league (the NHL), a suburb with delusions of grandeur (Glendale, Arizona), and a small, regional think tank (the Goldwater Institute).   At stake is an important source of value for nearly every professional sports team:  taxpayer subsidies.

While the NFL’s Superbowl is held in different cities each year, locations for the game used to have one thing in common:  They were warm weather tourist cities like New Orleans, Miami, or San Diego.  But recently we have seen the NFL award their big game to cities like Detroit, a record cold Dallas, Indianapolis, and New York.  It turns out the NFL has changed its decision-model for choosing Superbowl cites.  Rather than choose the city best able to attract fans, it now chooses the location best able to attract government subsidies.

'Not from the shots, right?' Basketball player collapses

1653 Athlete Cardiac Arrests or Serious Issues, 1148 of Them Dead, Since COVID Injection

Bills' Damar Hamlin is speaking with team after breathing tube is removed...

Is Damar Hamlin The Latest Celebrity Victim Of The Covid Kill Shots?

Dr. Peter McCullough on the disturbing trend of cardiac events in professional athletes...

With Roughly 1.7 Million NFL Hits in Last 50 Years Why Have We Never Seen an...

With Heavy Hearts, N.F.L. Players Prepare to Go Back to Work

Damar Hamlin Collapse on the Field

Buffalo Bills safety Damar Hamlin, 24, 'has pulse but is not breathing on his own' after col

How Much Prize Money Do World Cup Champions Win?