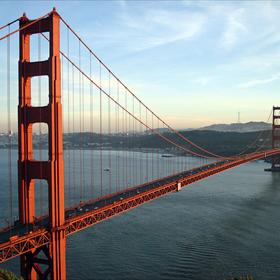 A field trip that included a walk along the Golden Gate Bridge ended with a student jumping off the bridge Thursday morning.

The unnamed student survived and was taken to San Francisco General Hospital, where he was reportedly being treated for injuries that included a bruised tailbone and a torn lung. Windsor High School superintendent Bill McDermott said the boy did not suffer any life threatening injuries. The boy's only complaint to paramedics on the scene was soreness and some bruising.

Surfers came to his rescue and helped him to shore.

The surfers said the boy told them he jumped for "fun." Early reports that he was dared to jump proved false. Students at the high school told reporters they did not dare him to jump, adding he came up with the idea on his own.

The Game Is Over And They Have Lost

Airlines Lobbying Congress To Allow Just One Pilot In The Cockpit

'Forgetful' Fauci Could Not Recall Key Details Of COVID Crisis Response During Deposition:

Meanwhile in China: As part of China's zero-tolerance Covid policy, they now have these