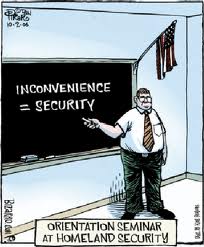 There aren’t too many things in this world that I worry about– the way I have my life structured makes me feel confident and prepared to deal with whatever might come my way.

Of the few things on my list, however, traveling to the United States is near the top. If you’ve ever gone through US border control checkpoints, you know what I’m talking about.

The gauntlet consists of two phases– first standing in line to have your passport stamped, then clearing the customs agent after baggage claim. The experience is unpredictable, and that’s being generous.

On some occasions, it’s smooth sailing without so much as a casual glance from agents at either stage. Other times, it can entail a lengthy interrogation about the nature of your business, and even extremely personal questions like, “what is this medication for” and “tell me your computer password”.

They’ll frequently herd large groups of people into inspection queues where officers dump the contents of travelers’ suitcases inside out looking for something, anything they can generate revenue on. Too many cigarettes? Report to the cashiers’ window with your checkbook.

Their tactics are intentionally designed to intimidate. In Miami International (easily the worst airport in the developed world), I remember once seeing a squad of customs agents standing in a rather ceremonious, single rank formation.

The senior officer gave the order, and his subordinates fanned out from the formation with the precision of a champion synchronized swim team, heading straight towards the nearest traveler for a random inspection with that booming, authoritarian tone of voice they always adopt. It appears they’re incapable of holding a normal conversation.

My last several visits to the United States (as infrequent as they are) have been fairly painful… and I always expect the worst. Luckily, I had a good experience yesterday evening arriving to JFK– they seemed short staffed and were rushing everyone through border control as quickly as possible.
The only oddity was that one of the customs agents was walking up and down the line giving travelers a sales pitch for why they should sign up for the US government’s “Global Entry” program, which offers the possibility for a speedy immigration experience.

It costs $100 as the officer told us over and over again… of course, no mention of the interview process or biometric data collected upon application. But I thought it was funny that the government was trying hard to pitch their product.

Once free of customs, the car service I use picked me up right on time, and within minutes we were headed for the Midtown Tunnel with the haunting sounds of Trent Reznor and Atticus Ross playing in the background.

My driver, a garrulous Argentine from Buenos Aires, chatted with me in his native Spanish– a notable variation on the language due to its numerous vocabulary differences and French sounding phonology.

As it turns out, Diego (‘like Maradona’ he told me, referring to Argentina’s futbol superhero) is quite adept at planting multiple flags. He was a police officer in Buenos Aires in the 1990s, a time in which the city was among the safest in the western hemisphere and being a cop was a decent profession.

Argentina’s economy turned for the worst in 2000, completely collapsing later that year. Under tremendous pressure to maintain an unrealistic currency peg, fight recession, and pay its swelling debts, the government defaulted on its debt obligations, devalued the peso, closed banks, and confiscated every centavo of private funds they could find.

Blood ran in the streets. Protestors in Buenos Aires staged huge riots demanding change.  In response, President Fernando de la Rua turned Qadaffi on them, sending police and military into the streets to engage the protestors. It wasn’t Argentina’s finest hour, and by no means a good time to be a police officer in Buenos Aires.

Diego wasn’t around for it.

As he told me, he saw first hand how the initial signs of the recession were wearing down society– rising crime rates and increased homelessness were everyday occurrences on his beat back in 1998.

His first step was in establishing a foreign bank account in neighboring Uruguay; it was a good fit since they spoke his language and it was easy to get to. This was in the days before September 11th– Diego told me how he hopped on a friend’s boat with several other people and headed for Uruguay without declaring their cash hoard. Must be nice.

He spent the rest of the year researching places to escape to… and when things started to turn in 1999, he headed to New York. At the time, the US economy was doing very well, and Argentina was on the visa-waiver program. It was easy for him to gain entry and apply for residency.

In time, he applied for naturalization in the US… not because he found himself swelling with pride for his newfound home, but because it helped reduce his uncertainty. “I was already here paying these crazy taxes… so I thought I would go ahead and apply for citizenship. I thought that having a second passport would give me more options.”

He’s right. It’s a simple, common sense approach to uncertainty: reducing concentration and exposure to any one single government reduces risk and provides more options to be able to better deal with uncertainty.