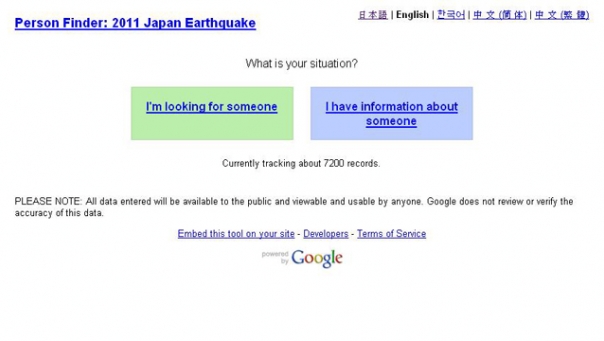 Google has unveiled a person finder app to aid those affected by the massive, magnitude 8.9 offshore earthquake that struck Japan and the massive tidal wave that followed it.

The tremendous earthquake -- the largest in Japan's history -- unleashed a 23-foot tsunami and was followed by more than 80 aftershocks for hours, many of them magnitude 6.0 or greater. Hundreds of bodies were found after the tsunami struck the northern coast of Japan. Japanese police say 200 to 300 bodies have been found in a northeastern coastal area, after the ferocious tsunami swept away boats, cars and homes.

To help survivors and families reunite in the stricken country and around the globe, Google has released the new tool, which simply aims to let friends and family keep in touch, or at least let others know a certain area or neighborhood is safe.

Use the person finder here