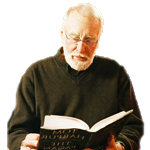 The Daily Bell is pleased to present an exclusive interview with Tom Harpur.

Introduction: Tom Harpur (born 1929) is a Canadian author, broadcaster, columnist and theologian. An ordained priest, he is a proponent of the Christ myth theory, the idea that Jesus did not exist historically, but is a mythical figure. He is the author of a number of books, including For Christ's Sake (1993), Life after Death (1991), and The Pagan Christ (2004). Harpur is a Fellow of the American Religious Public Relations Council, and in 1976 won a State of Israel Silver Medal for Outstanding Journalism. His biography is included in the American Who's Who in Religion, Canadian Who's Who, and Men of Achievement. In 2008 the CBC documentary The Pagan Christ, based upon Harpur's book, won the Platinum Remi Award at The Houston International Film Festival and The Gold Camera Award at The U.S. International Film and Video Festival in Redondo Beach (LA) California. He belongs to the Canadian Association of Rhodes Scholars and The Writers' Union.

Daily Bell: You attended Oxford University on a Rhodes Scholarship 1951-1954. What was that like?

Tom Harpur: I just finished a memoir where I describe my experiences in great detail. To try and sum it up, it was most extraordinary, it was such a privilege to be in that place where so many brilliant and brave people have toiled and made their mark. It was very humbling and at the same time tremendously challenging. I found it to be a very liberating and wonderful experience.