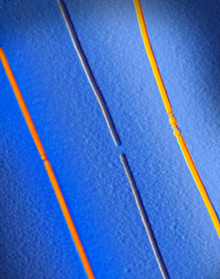 A new type of nonvolatile memory based on carbon nanotubes has dramatically lower power requirements than current technology. It uses the nanotubes to read and write data to small islands of phase-change materials, which store information. With further development, the new technology could extend battery life in mobile devices and also make desktop computers more efficient.

Nonvolatile memory stores information even when the power is switched off. The standard technology for it, flash memory, is used in smart phones, cameras, USB sticks, and fast-booting netbook computers. But the storage density of flash memory is reaching its limit because the transistors used to make flash memory arrays cannot be miniaturized any further. The power needed to write to flash is also a speed limitation, and it drains the batteries in portable devices.

Some Old Oil and Gas Fields Have Lithium Rich Water

Next Issue Of The Wild Bunch Dispatch: Emergency Medical Preps For Grid Down Scenarios