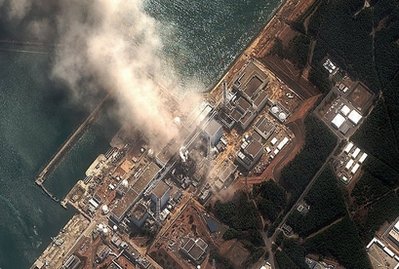 Concerns about a radiation release from the Fukushima Daiichi power facility have focused on its stricken nuclear reactors, but the plants of that design also store highly radioactive spent fuel in pools outside the protective containment structure that surrounds the reactor itself.

Opponents of nuclear power have warned for years that if these pools drain, either by accident or terrorist attack, it could lead to a fire and a catastrophic release of radiation. Now, there have been hydrogen explosions at two of the reactor buildings housing spent fuel pools at Fukushima.

This diagram shows where spent fuel pools are typically located in the 1970s-vintage GE Mark I reactor design in use at Fukushima units 1, 2 and 3, where officials suspect reactor fuel has melted.

The nuclear industry says fears about the storage pools at U.S. plants are overblown because the pools are protected and, even if fuel is exposed to the air, the chance of a fire is incredibly small. And with limited information being released about conditions at Fukushima, the status of spent fuel pools is uncertain.

The fuel that powers a nuclear reactor only works so long. When it is exhausted, it is still radioactive and physically very hot. So it needs to cool in a deep tank of water before it can be stored elsewhere.

At Fukushima, these tanks are attached to the outside of the reactor’s containment structure. The pools are deep – typically the fuel lies under 25 feet of water. Although the concrete-and-steel containment is designed to trap radiation leaks, there is no such protection for pools outside.

When the U.S. reactors were built, everyone assumed the government would open a national storage center to handle the tons of radioactive spent fuel from nuclear plants. The proposed Yucca Mountain site in Nevada never opened, so the old fuel sits at nuclear plants across the country.