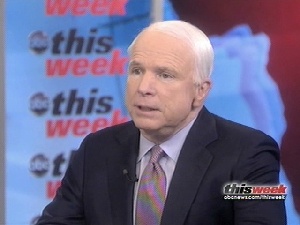 Two influential US senators Monday filed a resolution calling for President Barack Obama to recognize the Libyan opposition force battling against the regime of Moamer Kadhafi.

The resolution, which does not carry the weight of becoming law if passed, also urges Obama to support a proposed no-fly zone over Libya to protect the rebels, who have been in retreat from Kadhafi's forces in recent days.

It also asks Obama's administration to develop a strategy aimed at fulfilling the president's stated goal: the end of the Kadhafi regime.

Senator John McCain, who co-authored the resolution with Senator Joseph Lieberman, told journalists that the United States should recognize the Libyan rebel council as a legitimate government "like the French did," he said.