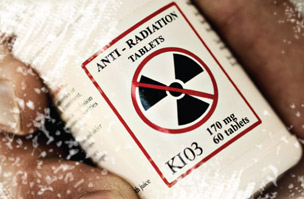 U.S. health authorities could be blocking Americans from obtaining the radiation-fighting drug potassium iodide, even as the threat of a radioactive cloud from the stricken Fukushima nuclear plant affecting the United States prompts panic buying, which has led to stocks of the drug running out across the country.

High strength potassium iodide is a once-a-day-pill than protects the thyroid gland from radiation and cancer caused by radioactive iodine. There are also weaker liquid forms of the drug that provide less protection, but supplies of these are also running low.

A caller to The Alex Jones Show today related how he tried to obtain potassium iodide via prescription from his doctor having failed to buy it over the counter due to stocks being completely exhausted.

“Yesterday afternoon (roughly 1400PST), the Urgent Care in Ventura, California, denied me a prescription for KI (potassium iodide): an over the counter, salt,” writes Michael (surname withheld). “The reason for denying me a prescription was predicated upon the Doctors conversation, with both CDC and DHSC representatives, whom discouraged it. After asking her if she took government orders, she replied, “No, but I do take their recommendations.”

“As KI is unavailable in Ventura right now and I was unable to get a prescription, which the pharmacy required, I am still without a supply of KI,” adds Michael.

The U.S. government has so far refused to stockpile supplies of the drug despite the threat of a nuclear disaster nearing the scale of Chernobyl.

“The federal government has never purchased enough to meet that standard,” reports CNN. “There is currently only enough of the medication available for populations living within 10 miles of nuclear reactors in the United States, according to U.S. officials.”

We are also receiving other unconfirmed reports that certain chemists and health stores that do have small amounts of the drug are refusing to sell it to customers, citing the excuse that it could be used for the production of methamphetamine

So I guess I'm not so rat-shit crazy to have this compound stockpiled in my 'survival gear' after all, huh?...

What These Drugs They're Pushing Aren't