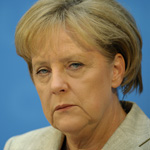 Total German triumph as EU minnows subjugated ... The Iron Chancellor of Germany could not have been clearer. "Whoever wants credit must fulfill our conditions". Chancellor Angela Merkel has agreed to cut the interest rate on the EU share of Greece's €110bn loan but this does not restore solvency. These conditions are capitulation by three vulnerable states on core policies, and partial loss of sovereignty for the rest of the eurozone. For Greece, the terms are a fire-sale of €50bn (£43.2bn) of national assets within four years, a tenfold increase from the original €5bn that premier George Papandreou thought he signed up to a year ago. When the IMF first mooted this sum last month he told the inspectors not to "meddle in the internal matters of the country." State holdings in Hellenic Post, Hellenic Railways, Athens Public Gas, the Pireaus port authority, Athens airport, Thessaloniki water, and ATEbank, to name a few, will not fetch more €15bn. What next? – UK Telegraph

Dominant Social Theme: The Germans are being quite reasonable. Frau Angela Merkel is benevolent.