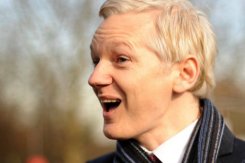 Julian Assange, the founder of whistleblower website WikiLeaks, has warned that the Internet was the "greatest spying machine the world has ever seen" and an obstacle to free speech.

"There was actually a Facebook revolt in Cairo three or four years ago," Assange explained.

"It was very small... After it, Facebook was used to round up all the principal participants and they were then beaten, interrogated and incarcerated.