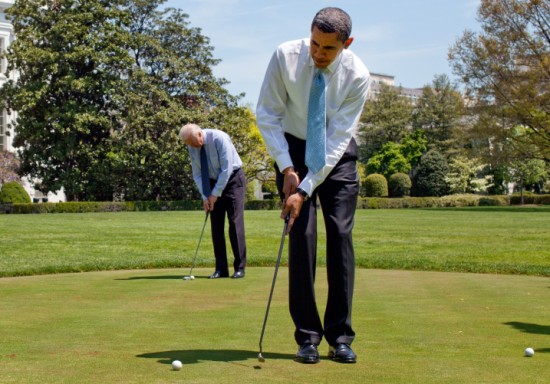 History tells us that Nero fiddled while Rome burned, but Barack Obama is providing the famous emperor with some serious competition when it comes to going AWOL while America and the world face crises the likes of which haven’t been experienced in decades.

Even as the situation at the stricken Fukushima nuclear plant continues to worsen by the hour, and as radiation surges across the Pacific towards the U.S. west coast while Americans panic buy supplies of potassium iodide, President Obama seems remarkably sanguine about the whole affair.

While protests and civil wars rage in Libya and Bahrain, Obama is keeping himself busy by videotaping his NCAA tournament picks, hitting the golf course for the 61st time in his presidency, and partying with lawmakers during a Chicago Bulls vs. Charlotte Bobcats game.

The most energy Obama could bother to devote to what is fast coming one of the biggest nuclear disasters in history was to make an empty statement about how people could donate to usaid.gov, while labeling the NCAA exercise a “great diversion.”

While Japan begs the United States for help to rescue the dire situation at Fukushima, Obama seems more concerned about dressing up nicely to please the media elite at the annual Gridiron Dinner.

Even as the planet faces the threat of a “new Chernobyl on steroids,” Obama has chosen to prioritize a speech about “Women’s History Month,” a White House get-together on “bullying” and a meeting with the Chicago Blackhawks instead of offering any kind of leadership.

But forget Japan, it’s not as if Obama hasn’t got any matters to attend to on the home front, with gas prices surging as a result of an oil spike driven by turmoil in the middle east, as well as a massive budget crisis, not to mention the perilous state of the US dollar and the stuttering economy.