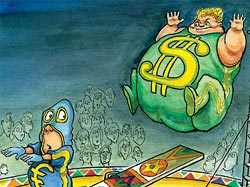 Inflation spooked the nation in the early 1980s. It surged and kept rising until it topped 13 percent.

These days, inflation is much lower. Yet to many Americans, it feels worse now. And for a good reason: Their income has been even flatter than inflation.

Back in the '80's, the money people made typically more than made up for high inflation. In 1981, banks would pay nearly 16 percent on a six-month CD. And workers typically got pay raises to match their higher living costs.

So we are hurting more now because they haven't inflated the earnings and the savings? But that would remove more money from their bucket...this is the end game.

There Are Very Strange Things Going On at Goldman Sachs